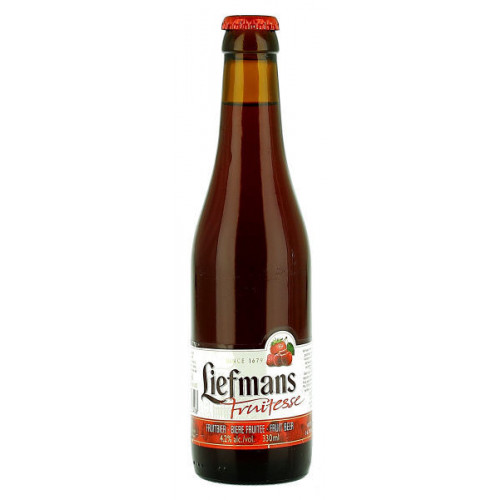 Share
Reviews Rating
(0)
Product Information
Country:
Producer:
Style:
Sub Style:
Container:
ABV:
Bottle Size:
Liefmans Fruitesse was first produced by the Liefmans Brewery back in 2009 and is the only fruit beer they make. Liefmans Fruitesse is a fruit beer that is brewed with fresh cherries and juices including strawberry, raspberry, blueberry and juniper berry. After the brewing process has finished it is then left to mature in the cellars of Liefmans brewery for one and a half years which gives use a lovely sweet beer with brilliantly fruity aromas.

Liefmans Fruitesse has a vivid red appearance due to the fruit juices used in its creation.

Upon pouring, strawberry, raspberry, blackberry and elderberry aromas combine into a strong, fruity aroma. The taste is refreshing and fruity so is ideal for the hot summer months and pairs perfectly when served with berries or chocolate cake.

Even though this is Liefmans only pure fruit beer they also produce Liefmans Cuvee-Brut which is made using a mix of their fruit beer and their old brown beer.
Ingredients/Allergens
(Allergens will be in Bold)
Water, Barley Malt,Wheat Malt, 15% Fruits(Cherry, Raspberry, Blueberry, Elderberry, Strawberry), Fructose, Black Carrot Concentrate, Aroma, Hops and Sweetener(Acesulfame-K)