Beers of Europe – 1st In the UK to Stock Oktoberfest Beers!

Celebrating The Oktoberfest At Home

From Munich, Germany to Norfolk, England…
Every year, 6 million people flock to the fields outside Munich to enjoy the world’s biggest beer festival Oktoberfest, which was first held in 1810 to celebrate the marriage of Prince Ludwig and Princess Therese. Munich’s most popular breweries produce a special Oktoberfest beer for the event which is scarcely available in the UK.

Unfortunately, the largest beer festival in the world cannot take place in Germany in 2020 due to the spread of Covid-19.

In a joint declaration, Bavaria's Minister-President Markus Söder and Munich's Lord Mayor Dieter Reiter decided: The risk for the people is too high to let the Wiesn 2020 take place. "It is about the biggest and most beautiful festival in the world", said Söder,  "We are living in different times. And living with Corona means living carefully. The greatest sensitivity applies to celebrations."

“The Oktoberfest lives from the atmosphere in the full tents, from many people celebrating together - but one has to take care of the Bavarian population and of course of the visitors from all over the world. In all likelihood, 2021 will see a particularly beautiful and intensive celebration together again: at the Oktoberfest from 18 September 2021”.

"It's a quite sad day for me today," said Lord Mayor Dieter Reiter, "several hearts are beating in my chest." The fact that the Wiesn 2020 cannot take place is "a bitter pill to swallow", not only because of the many Munich residents and Bavarians who love their Oktoberfest so much but of course also because of its economic significance for the city of Munich. The decision had not been taken lightly, but they no longer wanted to give the population hope. "We hope that next year we can make it up together!”

Celebrate The Oktoberfest At Home!

The ‘Big 3’ Oktoberfest beers have just arrived (14/8/20) at Beers of Europe, Britain’s Biggest Online Beer Retailer, making them the first place in the country to stock the sought-after Munich beers, Lowenbrau, Hofbrau and Spaten Oktoberfest bier.

Speaking just after the Oktoberfest beers arrived this afternoon at their warehouse in Setchey, just outside King’s Lynn, Marketing Manager Amanda Waterfield said:

“Going to the festival is a fantastic experience, but unfortunately there will be no Oktoberfest this year due to Covid-19.  Beers of Europe offers you the next best thing, you can now buy the first big 3 Oktoberfest beers, Lowenbrau, Hofbrau and Spaten which are now available to purchase online, we are once again the first to stock these beers in the UK. The Oktoberfest Beers are not available as early to purchase as as anywhere else in the UK as Beers of Europe and that is a credit to the great relationship we have built over the years with our suppliers. Being able to deliver across the country in a quick fashion means our customers get a taste before anyone else – win! win! plenty of happy beer-drinkers!”.

Beers of Europe have taken delivery of three of the Oktoberfest beers from the usual five range, the other two being delivered in the next two weeks.  The three big Munich breweries are Hofbräuhaus, Löwenbräu, and Spaten.  The sheer amount of customer requests for the return of Oktoberfest is the driving force for its prompt arrival and Beers of Europe look forward to a successful festival season.

Beers of Europe is a family run business based in Setchey, just outside King’s Lynn. Since 2000, the Clark family has built up a range of over 5000 products, including beers, ciders, wines, spirits, and much more from all over the world. The shop is at present being extended and a ‘freshen up’ so it is closed but all of our beers are available online (ww.beersofeurope.co.uk)  for delivery, or Click & Collect with 24 hours notice. 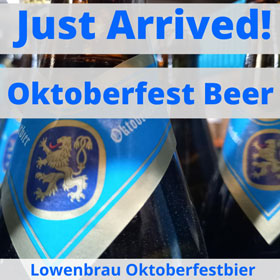 It is difficult to pinpoint the exact date that Lowenbrau began its journey, but the earliest documented reference to an Inn called ‘Zur Lowen’ showed that beer was being brewed at 17 Löwenbruge Straße back in 1383. As was standard practise back then, the Landlord brewed his own beer, and it is from this place and time that the brewery grew from strength to strength to the global powerhouse it is today. 1746 is the first mention of Lowenbrau in the Munich tax records as a brewery and a move to a larger residence in 1851 paved the way for Lowenbrau and its famous Lion logo to produce a quarter of the entire cities’ output just twelve years later in 1863. The brewery was destroyed in 1945 by an air raid carried out by the Allies. Once rebuilt, it began to distribute internationally to be known as one of the big six Munich breweries, with their beers backing up such a prestigious title.

Having demonstrated superiority in brewing by upholding the 1516 German Purity Laws, they know how to brew good beer, and their Oktoberfest is no different. Since 1810 Lowenbrau has provided the citizens of Munchen with their annual special to celebrate the world-famous festival. It is a limited-edition brew that is only produced in Germany, not under license abroad, which guarantees its rarity along with its quality. Sponsoring two tents at the festival, their presence is made clear with a 4.5 metre tall Lion on the building that roars the brewery name.

At 6%, this is a stronger brew than Lowenbrau Original and appears a pale yellow in colour with a white head. Sweet malts on the nose with notes of caramel and grain complete the aroma. This medium-bodied beer has a malt taste with a hint of hop bitterness as well as mild spice flavours. The strength of the brew ensures lasting warmth in the finish.  Served slightly chilled in a Stein glass if possible, but you do not need to go out of your way and get a German pretzel to enjoy this easy-drinking beverage, it is refreshing and satisfies just on its own. 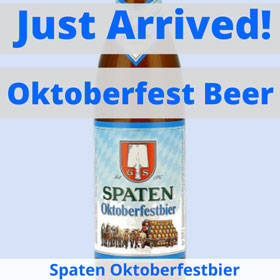 Spaten was first founded in the 14th century, with the Munich Tax bill of 1397 registering a brewer by the name of Herr Spaeth on the property of ‘Welser Prew’ brewing his own Oberspathbräu. The building would go on to play a massive part in Spaten’s history, outliving many Brewery owners during the 15th century. It then ran under the ownership of several different families across the next few centuries, the Stamberger Family 1522-1622, the Spatt Family 1622- 1704 (The family that gave their name to the brewery we know today) and the Siessmayr Family 1704-1807. Whilst the business was kept alive and well, it never truly prospered until it entered the hands of one of Munich’s most famous brewing families, the Sedlmayrs. Gabriel Sedlmayr was the master brewer to the Royal court of Bavaria and bought Spaten, then the smallest brewery in Munich, with ambitious plans to turn it to greatness. His death in 1837 brought an end to his reign, but his sons promptly took over with aspirations of their own. Gabriel’s son Joseph soon left to own the Leist-Franziskaner brewery, whilst the other son, also called Gabriel, ran the Spaten brewery. Come 1867, Spaten is the largest brewery in Munich, a title it retained until the 1890’s. The 20th century brought Spaten and Leist-Franziskaner (Both still owned by the Sedlmayr family) together to form a joint stock family. Later on in 1997, celebrating its 600th anniversary, Spaten merges with Lowenbrau, but both still stand independent with their products and brand.

Spaten has played a pivotal part in Oktoberfest over the years, being the first of the big six to brew an amber Marzen style beer, thus birthing the idea of brewing a special beer specifically for the festival. More recently, since 1950, the Mayor of Munich has personally tapped the first keg of beer in the Schottenhamel tent, which marks the beginning of Oktoberfest. The onlookers and citizens of Munich judge the Mayor on his ability to strike the cask as they see it as a good judge of character and whether he is a good fit to his role as Mayor.

Spaten Oktoberfest pours a yellow colour and has a decent, long-lasting white head. The aroma highlights the malts in the beer, with toasted grains, as well as hops, also lurking. The flavour of the Marzen beverage is sweet with a bitter taste and a few mild spice notes, followed by a hoppy finish. To be served in traditional Stein glass with a hearty dish but just as perfect on its own. An authentic tasting Oktoberfest beer that oozes history as well as quality. 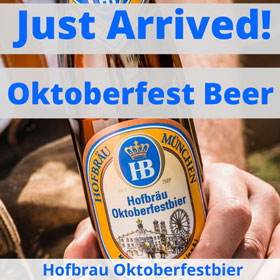 For a long time, Munich’s court society wasn’t a big fan of the local brews at all, which lead to regular imports of beer from North Germany, especially from Einbeck, where brewers would produce an extraordinarily strong beer for special occasions to make it exportable. the imported beer was expensive, which lead to Duke Wilhelm V of Bavaria (1548-1626) to founding an own brewery at Burg Trausnitz in Landshut, where he grew up.

After moving to Munich, he also wanted to have his court supplied with local beer there and opened the ducal court brewery (Herzogliches Hofbräuhaus) at the Alter Hof (old court) on September 27 1589. Soon, its brown beer (Braunbier) was also sold publicly. The desire for the good beer from Einbeck, however, was at least as strong as the beer itself. Consequently, in 1612 a brew master from Einbeck, Elias Pichler, was recruited to produce “Ainpöckisch Bier” in Munich. Its name was bavarified to “Oanbock” in Munich and later abbreviated to Bock. This seasonal Starkbier (strong beer) is still brewed today by Hofbräuhaus and sold as “Maibock” in May.

Today, Hofbräu isn’t specifically known for its Weißbier, although the history of Weißbier in Bavaria is closely tied to the Hofbräuhaus. The production of this beer style, which originates in Bohemia, was prohibited in Bavaria after the purity law of 1516, as wheat was exclusively reserved to be used for making bread. Only two noble families from Lower Bavaria kept the right to brew Weißbier. Duke Maximilian, I transformed the ban into a profitable state monopoly and recruited the first Weißbier master for the Hofbräuhaus in 1602. At first, both brown and white beer were produced in the brewery of Alter Hof, but only five years later, the production of the popular Weißbier moved into the new “Weißes Hofbräuhaus” (White Court Brewery) at Platzl. The old brown brewery merged with the white one in 1808.

The Hofbräuhaus is today mainly known for the legendary restaurant at Platzl, which was established by King Ludwig I in 1828. Before that, only the Maibock was served to the public there in May. In 1896, the brewery had to move a second time, as it became larger and larger, without having sufficient space for expansion at Platzl. Its new location at Wiener Platz, which already had a storage cellar at that time, remained the home of the brewery until April 6 1987, when a fire destroyed it. Today, the brewery resides in the outskirts, in Riem, while the restaurant Hofbräukeller is still present at Wiener Platz.
The first time, Hofbräu beer has been served at Oktoberfest, was in 1950 in the Schottenhamel-Festhalle.

All three Oktoberfest Beers are available online from Beers of Europe: