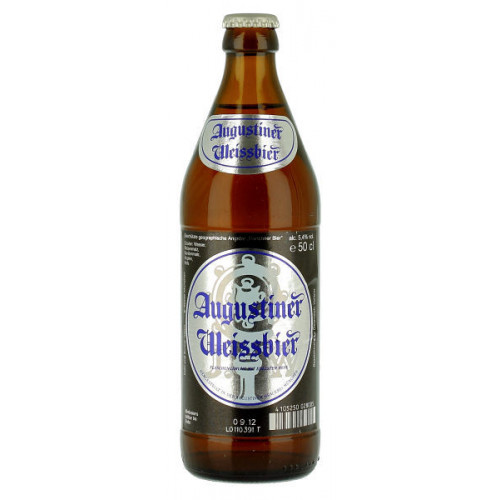 Share
Reviews Rating
(7)
Product Information
Country:
Producer:
Style:
Sub Style:
Container:
ABV:
Bottle Size:
In the 14th century, Augustiner was home to the largest religious building in Munich, the Hallenkirche. Much like many other monasteries, Augustiner brewed on site to provide money for the monks, so that they could maintain their lifestyle. It fell into the hands of the Wagner family in the 19th century, who helped to modernise the brewery and secured its first Oktoberfest appearance circa 1867. It has taken massive strides over the past couple of centuries to become one of the most prolific of German breweries and its great reputation and even better beers ensure it will still be moving forward for years to come.
Focusing on its weissbier in particular, it is quite strong for a generic wheat at 5.4% and appears amber coloured in appearance, with the usual hazy texture from the yeast. Its white foam releases the fruity aroma with apricot and banana leading the way, with spices, bread, citrus and honey all stemming from the exquisite use of the top quality hops and malts. The palate explores these flavours enticingly with a smooth and creamy taste to it before it gives way to a bitter finish, making it very drinkable indeed. It picks up several of its flavours from its careful maturity where it is stored in the brewery cellar vaults and then carefully cultivated to then end up in bottle fermentation.