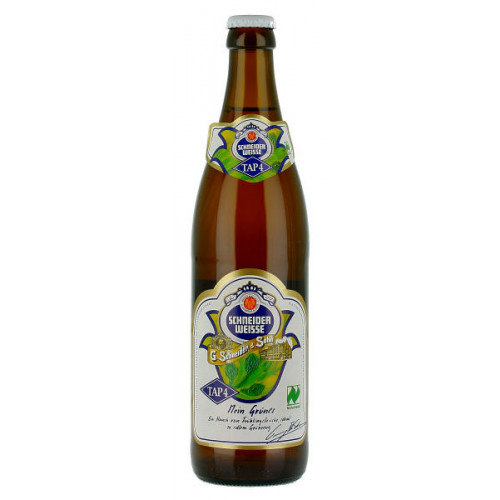 Share
Reviews Rating
(6)
Product Information
Country:
Producer:
Style:
Sub Style:
Container:
ABV:
Bottle Size:
Schneider Weisse was founded in the Kelheim region of Germany in the 19th Century and is renowned across the world for instigating the revival of the wheat beer following King Ludwig’s discontinuation of the style due to poor sales. Going from strength to strength, Schneider Weisse today is in the 6th generation of the Schneider family, but still retains the passion and creativity from more than 200 years ago. They produce several beers or ‘taps’ as they are known and this one in particular, the ‘Tap 4’, is their wheat festival special. Back when Schneider Weisse operated in Munich, this was the beer brewed for the festiva between the years of 1916-1944.
Tap 4 Meine Grunes has a strong hop influence, using Hallertauer, Tradition and Cascade all of which are evident in the beers aroma, along with citrus notes, with the hops being well balanced by the wheat and barley malts. It is bronze in colour with the fruits from the malts and citrus from the hops resulting in a full flavoured and easy drinking beverage, that resumed production in 1999 at 6.2%. It can be paired beautifully with light meals and should be served in a weizen glass, perfect for session drinking at bbqs or in a festival setting.