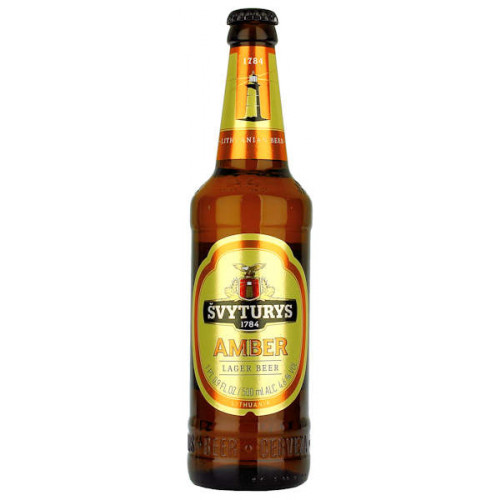 Share
Reviews Rating
(0)
Product Information
Country:
Producer:
Style:
Sub Style:
Container:
ABV:
Bottle Size:
Gintarinis beer belongs to the “Pilsner class”, it’s volume is 4.7% and the colour is of light amber. The beer is made of malt, hops, beer yeast and fresh water. This is the lightest beer that belongs to Svyturys family. Lithuanian beer lovers like it for it’s fresh, slightly bitter taste and long lasting aroma of hops. In 1999 it was awarded with a gold medal in “Product of the Year” contest by Lithuanian Confederation of Industrialists.

It might seem wired today, but in 1995 when the reconstructed Svyturys brewery offered Gintarinis beer in Klaipeda for the first time, the lowlanders decided that brewers are making fun of them. “They cheated! They diluted it!”, shouted fans of dark beer who were used to Zigulinis. The way of Gintarinis into the hearts of Lithuanians was not easy. At first this beer was made darker and thicker on purpose. Later it became lighter and has been improved until it met the requirements of Svyturys technologists and consumers. Gintarinis is available in 0.5 litre bottles. Because the demand for the light beer is constantly increasing, the brewers of Svyturys are dreaming about creation of new, even lighter beer that would be perfect to stay the thirst and refresh on the hot summers day.