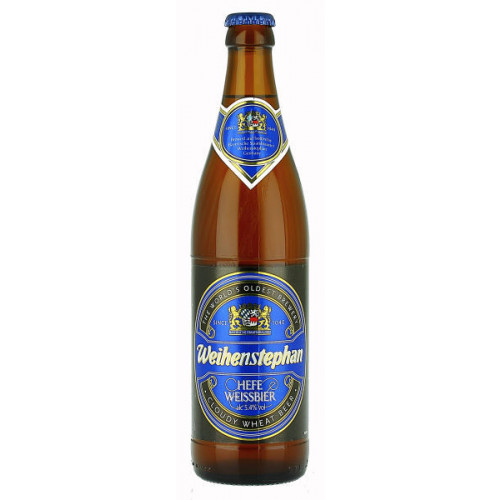 Share
Reviews Rating
(10)
Product Information
Country:
Producer:
Style:
Sub Style:
Container:
ABV:
Bottle Size:
The title of the oldest brewery in the world is in the hands of Weihenstephaner, founded in 1040 on the Weihenstephan hill north of Munich in Freising. The brewery has operated for almost 1000 years. Along with some of the world’s most knowledgeable brew masters, it has produced an excellent range of beers, all in accordance with the German Reinheisgebot which has helped it to secure numerous awards internationally for its products as well as being appreciated by connoisseurs in over 30 countries worldwide every day.
Weihenstephaner Hefeweissbier weighs in at 5.4% and is a German wheat beer at the top of its class. The world’s oldest brewery certainly knows a thing or two about brewing a high quality beverage whatever the style. It appears a yellow/gold in colour with a fine poured white head. The haze, as is signature of a wheat beer, is present, and releases an aroma of cloves, banana and nutmeg coming from the malts used. The malt is once again evident in the taste, balanced by the fruit and spices that the hops bring to the table and it combines beautifully to produce a spectacular wheat beer that does exactly what it should. Refreshing and smooth, this beer can be paired with seafood or fish as well as cheese or Bavarian dishes. This is brewed to a tradition centuries old, but when the result is this good, why change?