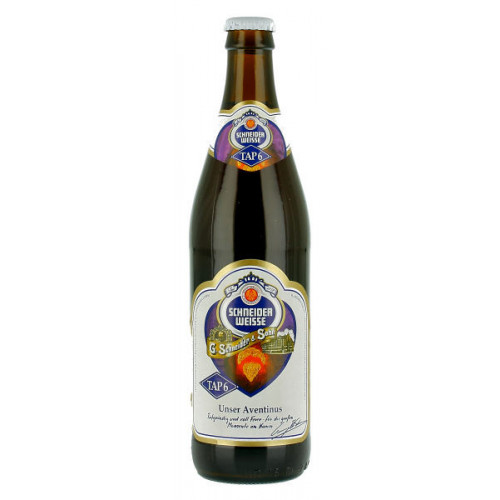 Share
Reviews Rating
(8)
Product Information
Country:
Producer:
Style:
Sub Style:
Container:
ABV:
Bottle Size:
Schneider Weisse was founded in the Kelheim region of Germany in the 19th century and is renowned across the world for instigating the revival of the wheat beer following King Ludwig’s discontinuation of the style due to poor sales. Going from strength to strength, Schneider Weisse today is in the 6th generation of the Schneider family, but still retains the passion and creativity from more than 200 years ago. They produce several beers or ‘taps’ as they are known and this one in particular, the ‘Tap 6’, is their wheat doppelbock.
The Tap 6 Mein Aventinus is Bavaria’s oldest wheat doppelbock, which has been brewed since 1907. As is typical of Schneider Weisse, it uses German Hallertauer hops, along with Tradition and Magnum, and its malts derive from wheat and barley. It weighs in at 8.2% and pours a dark ruby colour with a strong creamy head. The fruits are apparent in the aroma with bananas, raisins and dried plums present along with slight liquorice and toasty notes. A full bodied beverage that is warming and well balanced, Tap 6 pairs well with roast meats as well as game, desserts and blue cheese. Strength across the board, allow yourself to indulge in this intense yet drinkable beer from the wheat kings of Bavaria.