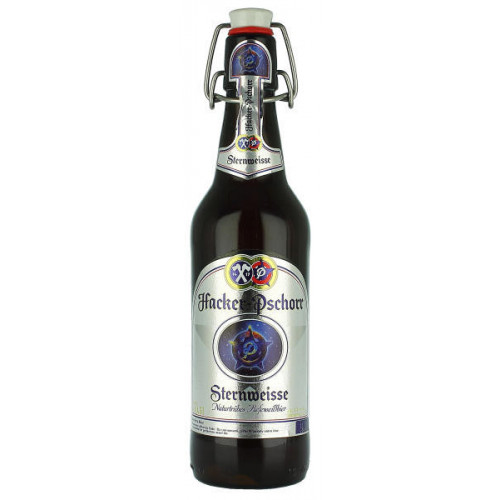 Share
Reviews Rating
(12)
Product Information
Country:
Producer:
Style:
Sub Style:
Container:
ABV:
Bottle Size:
Hacker Pschorr is one of the big six Munich breweries and was founded in 1417 by monks before ending up in the hands of the Hacker Family. It wasn’t until 1793 when Joseph Pschorr married into the family that the brewery was put on the map. His two sons would go on to divide the brewery, taking over the two separate Hacker and Pschorr wings, which would prosper under their guidance. However, the Second World War led to the Pschorr brewery being bombed, and Hacker then allowed Pschorr to brew at their brewery twice a week until the damage was repaired. Blood proved thicker than water and in 1972 the two breweries joined forces once again. Today the brewery is part of the Paulaner brand but still operates independently.
Hacker-Pschorr’s Sternwisse means White Star and appears a copper-amber in colour and is the newest star in Bavaria’s sky. This lightly carbonated wheat beers expertly combines dark malts with light fruit flavours to create a well balanced wheat beer. It contains all natural ingredients, as it adheres to the German Purity Laws and it is also unfiltered. At 5.5% it is complex without being too intense and has a delicate flavour with the malts giving flavours of caramel, almonds and marzipan as well as a hint of coriander. The aroma is that of delicate fruits and bubble gum, with soft fruits heading into the flavour followed by smoked ham and bacon. It pairs particularly well with hearty dishes.