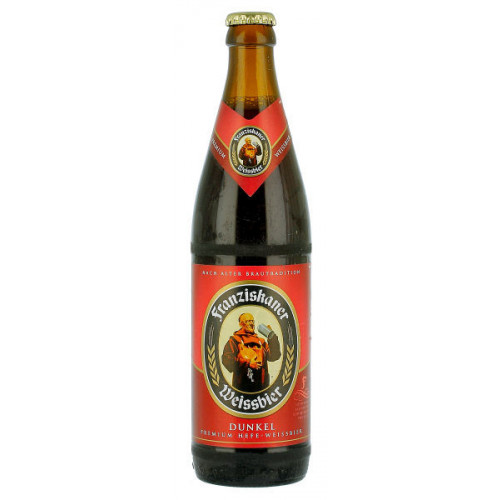 Share
Reviews Rating
(8)
Product Information
Country:
Producer:
Style:
Sub Style:
Container:
ABV:
Bottle Size:
Franziskaner was founded by the same family as Spaten and is a Munich brewery with plenty of history and plenty to offer, although not with the same world famous reputation as its sibling. The Franziskaner Kristal Weissbier provides a refreshing wheat beer taste without the yeast to haze the beer, leading to the name crystal, because of its clean appearance in comparison to usual wheat beers. It has malts from both wheat and barley as well as local hops from Munich which, along with the top fermenting yeast strain and its own well 200m below to provide the water, result in a top quality beer with great ingredients leading to a superb taste.
Like other dunkels, it is the large quantities of dark roasted malt that separates it from a generic hefe-weissbier. A dunkel balances the refreshing and easy drinking nature of a weissbier and the complexity of much stronger beverages resulting in hidden notes you didn’t think were possible to extract from a wheat beer. This one in particular is a deep brown with a cream coloured head, which of course it gets from its dark nature and strong yeast. It has a mouth-watering aroma, with notes of fresh bread, nuts as well as caramel. A velvety feel is present on the palate with a refreshing tang to finish. At 5% it is an easy drinking dunkel that can perfectly accompany a venison dish or a dessert.