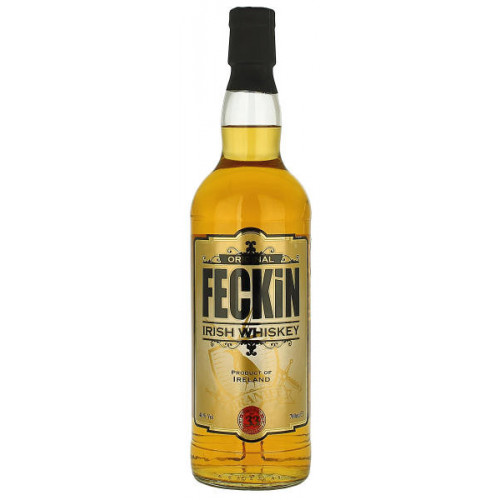 Share
Reviews Rating
(0)
Product Information
Country:
Style:
ABV:
Bottle Size:
Feckin Irish Whiskey is the brainchild of Shane Braniff, from Ballyward in Portaferry, Co Down. Shane used his combined knowledge as the son of a third generation farmer and publican to create this perfect blend. Distilled by Cooley Distillery in Co. Louth, Ireland, the only independent Irish-owned whiskey distillery in Ireland, Feckin celebrated its launch in 2005 as the Spirit of Ireland bottled.

Aiming to encapsulate the Irish charm and character, the Feckin Drinks Company set out to create not only a high-quality whiskey, but also a brand that captures the Irish culture of fun, craic and the good times!

The creation of an Irish whiskey that is both smooth and highly palatable was led by an expert panel of blenders. They worked to create a brand that would accommodate the discerning taste buds of whiskey connoisseurs, and also introduce a new generation of brand-conscious whiskey drinkers (18-25 yrs).The result - quite simply, a high-quality whiskey to delight everyone.