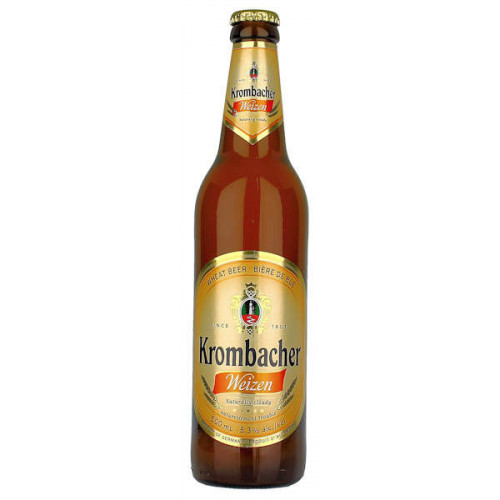 Share
Reviews Rating
(2)
Product Information
Country:
Producer:
Style:
Sub Style:
Container:
ABV:
Bottle Size:
Krombacher started off the same way many German breweries have with an innkeeper who just brewed a beer to make a living, completely unaware that he is starting a chain of events that results in a beer that would be admired around the world centuries later.The first mention of the Krombacher Brewery is in 1803, family run and with a reputation that began to spread through the towns and villages as far as Cologne. The next century brought an industrial revolution to Germany, bringing new technologies, new methods of distribution and, more importantly, new customers to try the delights of Krombacher.
Krombacher’s journey to the top has been attributed for the most part to the success of their pilsner. However they do not have just one beer. In, in fact much more recently in 2007, Krombacher released their weizen beer into the world. Stronger than the pils at 5.3%, it is an amber coloured wheat with a classic haze from the yeast making the texture cloudy. It contains Krombacher’s locally sourced spring water and has Hallertau hops and wheat, caramel and barley malts. A pure yeast strain and a full fermentation guarantee a wheat taste like no other. The aroma is that of banana and honey, courtesy of the malts and the taste is mild and soft whilst bursting with flavour. This can be served around 8 °C and can accompany lighter dishes such as seafood and salads as well as poultry.