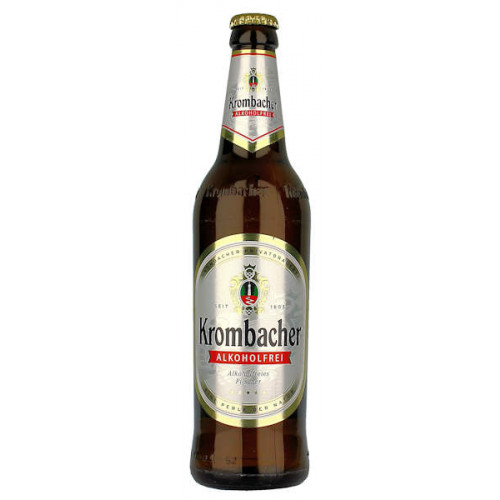 Share
Reviews Rating
(0)
Product Information
Country:
Producer:
Style:
Sub Style:
Container:
ABV:
Bottle Size:
Krombacher started off the same way many German breweries have with an innkeeper who just brewed a beer to make a living, completely unaware that he is starting a chain of events that results in a beer that would be admired around the world centuries later.The first mention of the Krombacher Brewery is in 1803, family run and with a reputation that began to spread through the towns and villages as far as Cologne. The next century brought an industrial revolution to Germany, bringing new technologies, new methods of distribution and, more importantly, new customers to try the delights of Krombacher.
Possibly the best of both worlds, a full flavoured refreshing pilsner without the alcohol is a reality and is right on your doorstep. Since 1999, Krombacher have had the answer and we are pleased to bring it to you. Brewed with completely natural ingredients, from the spring water they obtain from the local mountain, to the fresh malts and hops they use, to produce a fantastic alcohol free or below the 0.5% mark as is the requirement in Germany. They use a process called interrupter fermentation to remove the alcohol but retain all the aromas and flavours of a Krombacher Pils. Like the full ABV pilsner, it is gold in colour with a fine poured head. This is sweet on the palate followed by malt flavour and a hoppy dryness. It can be served with many dishes such as steak through to poached or grilled fish as well as casseroles. A versatile drink that can be had after a hard day at the office, after sports or simply enjoyed with friends.