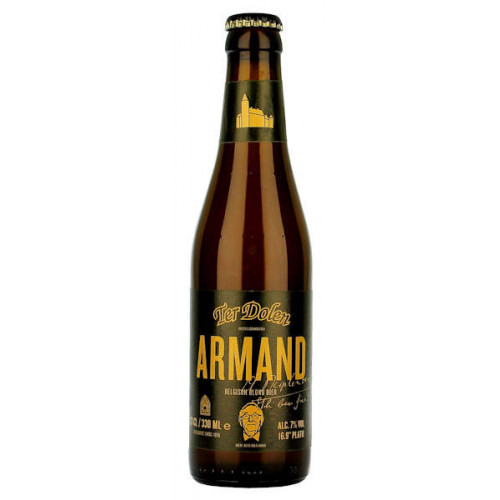 Share
Reviews Rating
(1)
Product Information
Country:
Producer:
Style:
Sub Style:
Container:
ABV:
Bottle Size:
The Ter Dolen brewery is located within the castle, Ter Dolen (The Dool) in Helchteren. The present castle dates back to the 16th century but the history dates further back, with the first entry being in 1282.The brewery was installed in the medieval castle front buildings in 1994.In 2008, Ter Dolen’s Blond, Dark, Tripel and Kriek became the first Limburg beers to be labelled as “Recognised Belgian Abbey Beer”.

Ter Dolen Armand is a fruity blond beer with an explosion of citrus aromas and flavours, resulting from dry hopping with Cascade hops.The beer is unfiltered in order to maintain the hoppy aroma as much as possible and pours slightly cloud with a bright white head.

Ter Dolen Armand is an award winning beer, having won a gold medal at the first International Belgian Beer Contest.
Ingredients/Allergens
(Allergens will be in Bold)
Water, Barley Malt(Gluten), Dextrose, Hops and Yeast