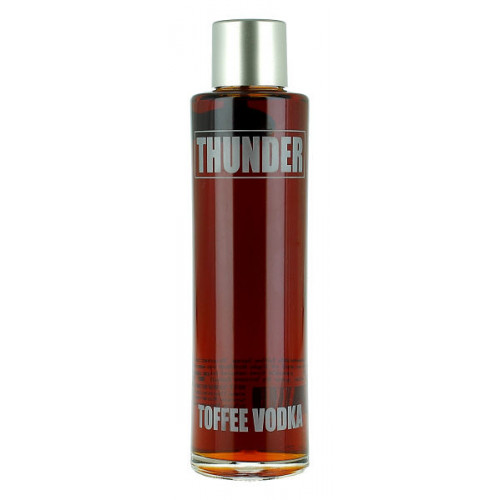 Share
Reviews Rating
(0)
Product Information
Country:
Style:
Sub Style:
ABV:
Bottle Size:
Unequalled and unique, Thunder Toffee Vodka is all about style and simplicity of taste. Thunder is the only Toffee Vodka on the market free from additives and preservatives. It is made from triple distilled premium vodka and completely natural toffee syrup, ABV 29.9%. Best served cold as a shot, over ice or in a cocktail. Originating from the slopes of the French ski resort of Val D'isere.

Thunder is the culmination of many years of mixing and meticulous preparation to find the perfect consistence of toffee vodka which could then be bottled, branded and introduced to the market.

Infamously popular amongst the skiing fraternity, toffee flavoured vodka mixes have been rife in their experimentation in the bars of the French Alps for decades, but it is not until now that a recipe has been developed that satisfies the taste buds in both vodka strength and toffee syrup delicacy.

Thunder is strong enough on 29.9% yet not too sweet, so satisfying both the male and female palate.