Back to all articles
Krombacher Brauerei | Q&A
Originally Posted on Nov 09, 2016

Are you curious to know about the people behind the beers you buy? Or perhaps you want to know what inspires brewers to brew and beer bloggers to blog? Our “Q&A” posts are a light hearted way of getting to know people working in, and connected to, the beer and alcohol industry.
Today’s post features Krombacher. 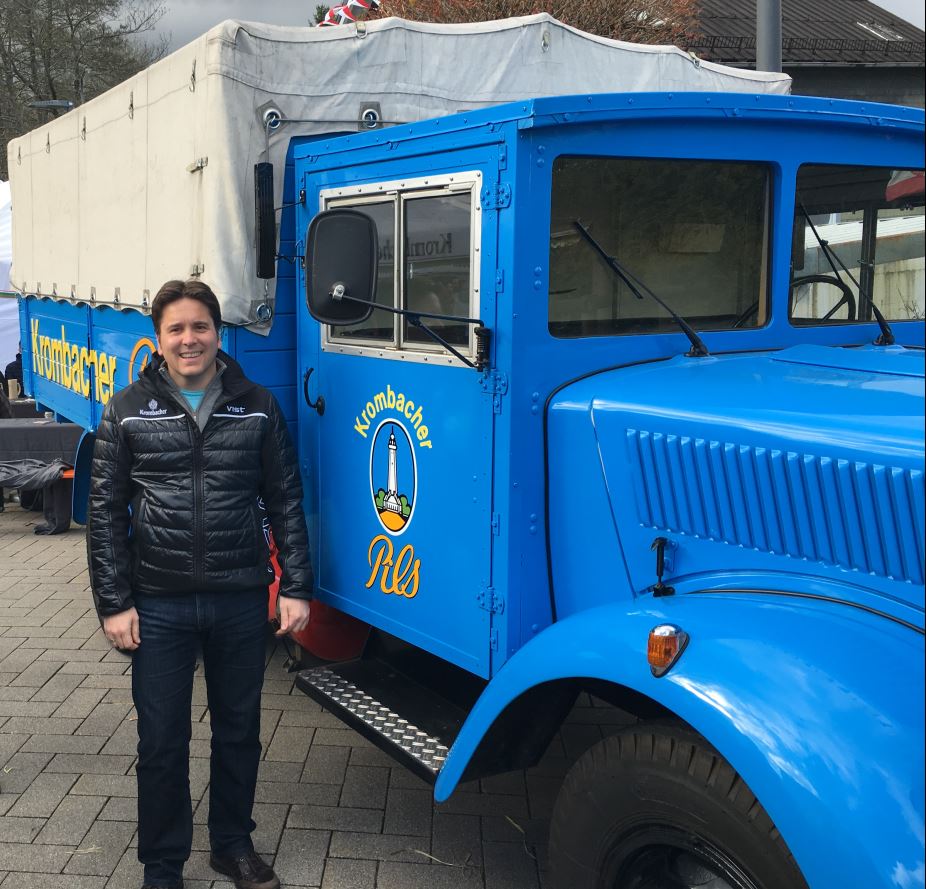 Who are you/what do you do?   My name is Stephan Kofler and I am the Director, Sales & Marketing of Krombacher Drinks UK Ltd., a fully owned subsidiary of the Krombacher Brauerei Germany. As a Country Head for our strategic markets UK and Italy, I am fully responsible for sales and marketing within those two countries.

When did your love affair with beer begin?   I have been working in the drinks industry for almost 20 years now. Previous UK roles include Customer Development Director at Matthew Clark, Fine Wine Exec at Bibendum Wines and the Trainee Manager Program with Majestic Wines. I have also held various roles in production, supply chain, logistics and sensory analysis of wines. I have been drinking beer and wine since I was 16 years old and worked in various countries. 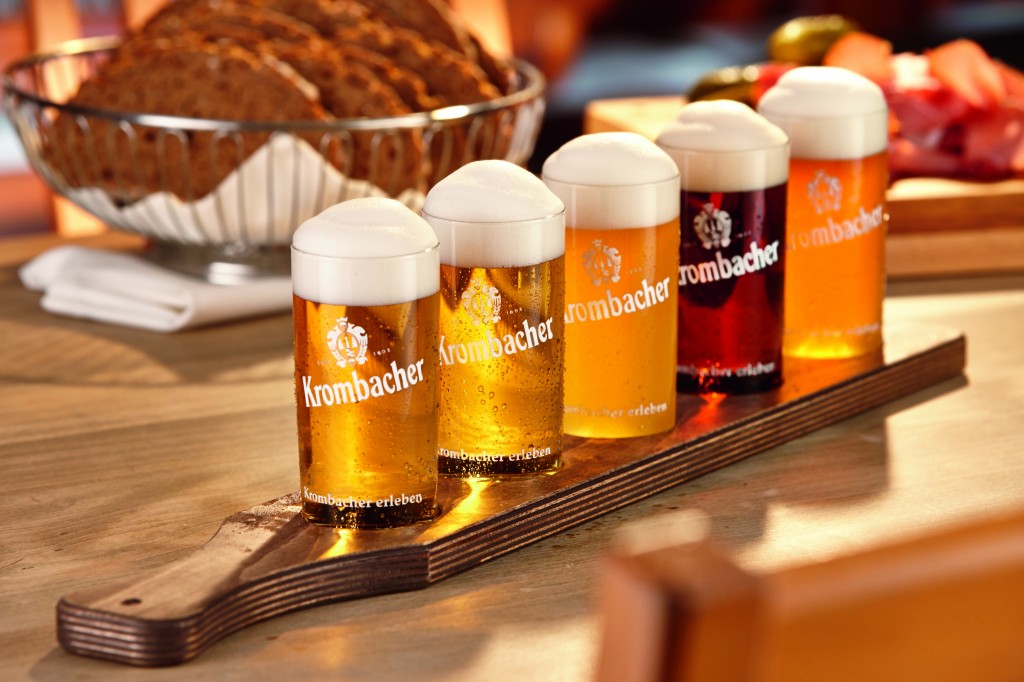 What’s the story behind the brewery name and logo?   For generations, the Kindelsbergturm has been the defining symbol on the Krombacher label: it’s the tower that stands at the top of Kindelsberg, the mountain overlooking the brewery. This symbolizes home (in German: Heimat) for the people of the Siegerland. On the Krombacher emblem, the tower is surrounded by green forest, representing Krombacher beer’s singular connection with the countryside: our brewery is embedded in its natural surroundings. The source in the lower part of the emblem is a symbol for our unique Felsquellwasser®, from which all Krombacher beers are produced. It is outlined in red, a reference to the iron-rich rocky soil of the Siegerland. The Krombacher emblem is framed by two ears of summer barley, left and right, and by hop cones, above and below. Thus, all of the ingredients incorporated in the German Reinheitsgebot are represented in the emblem that you will find on the Krombacher label.

Where do you see, or hope to see, the brewery in 5 years time?   As far as the UK is concerned, we have now increased our sales for 5 years running. While increases in volume sales are important, we are very keen to establish long term, sustainable and mutually beneficial relationships with our Route to Markets and On-Trade Stockists. We have a clear strategic goal to become the UK’s No.1 (Super-) Premium Imported beer brand from Germany.

Looking ahead, what new things can we expect from Krombacher over the coming months?    We have only recently launched our Premium Radler, which will attract continued focus from our side throughout 2017. We have also launched a naturally cloudy, unpasteurised Kellerbier in Germany. Who knows, this great product might well be available to taste in premium on-trade outlets in the future. 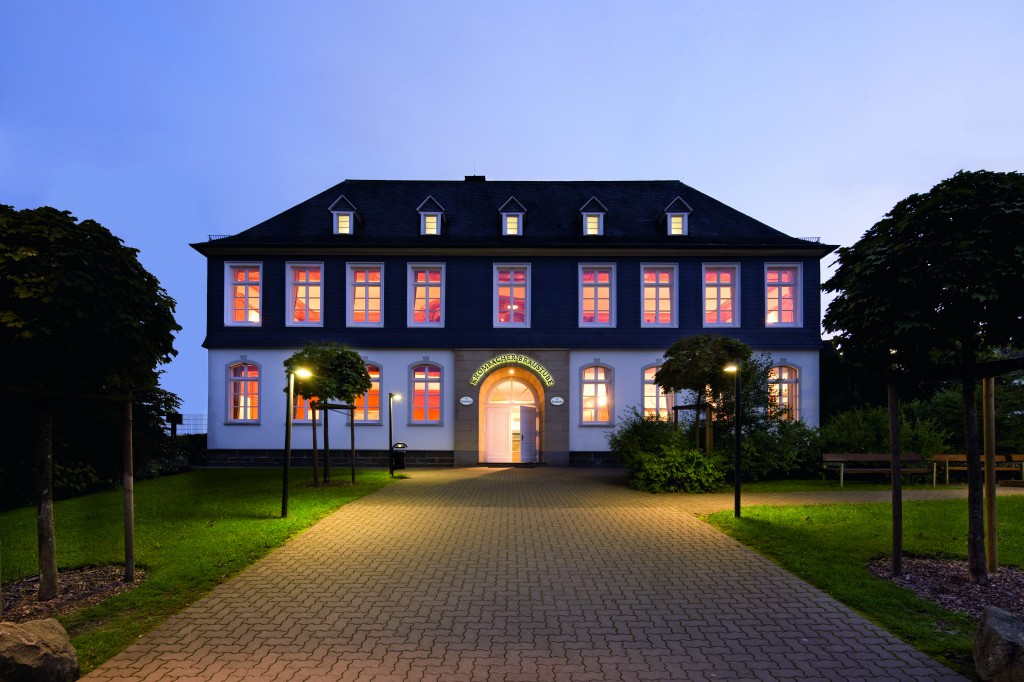 Are there any other breweries which have influenced you?   Not really, but I do have a soft spot for a fresh Pilsner Urquell Tankovna Tankbeer from the Czech Republic and a perfectly served Augustiner Braeu Edelstoff from Munich.


What have you found to be the hardest thing to master when learning to brew?   Unfortunately, I do not have the fantastic privilege to brew any of our beers. I leave this task to our experienced Master Brewers in Krombach.

What do you think makes a great beer?   To create a wholesome beer with an authentic flavour, you need natural and wholesome ingredients. The provenance of ingredients is integral to the premium quality of the final product alongside the commitment to the art of brewing. It is of utmost importance that only the best ingredients are selected and that the brewing process takes place without artificial additives, treatment or processes.
The German Reinheitsgebot marks its 500th anniversary this year and Krombacher takes pride in brewing all of their beers according to the purity law by using only local spring water sourced from 48 wells, two-row summer barley and Siegel hops from the Hallertau. 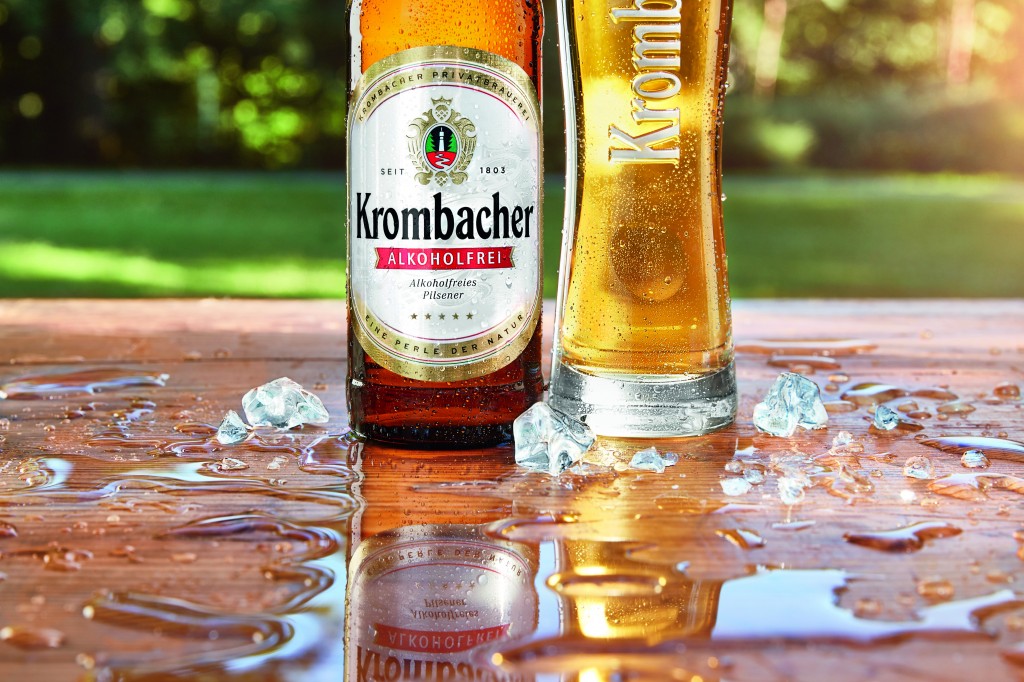 What was your first drink and where were you when you had it?   My first beer was a local Lager back in Italy and I had to ask my older sister to buy it for me as I was too young to be legally allowed to drink.

What drink can you no longer face having had one too many?   Most definitely Tequila and distilled fruit brandies.

What is your favourite style of beer?   I absolutely love a good quality Pils, perfectly poured and served at the right temperature. Pure bliss. Krombacher is Germany’s favourite premium Pils with one in every ten Pils consumed in Germany being a Krombacher. 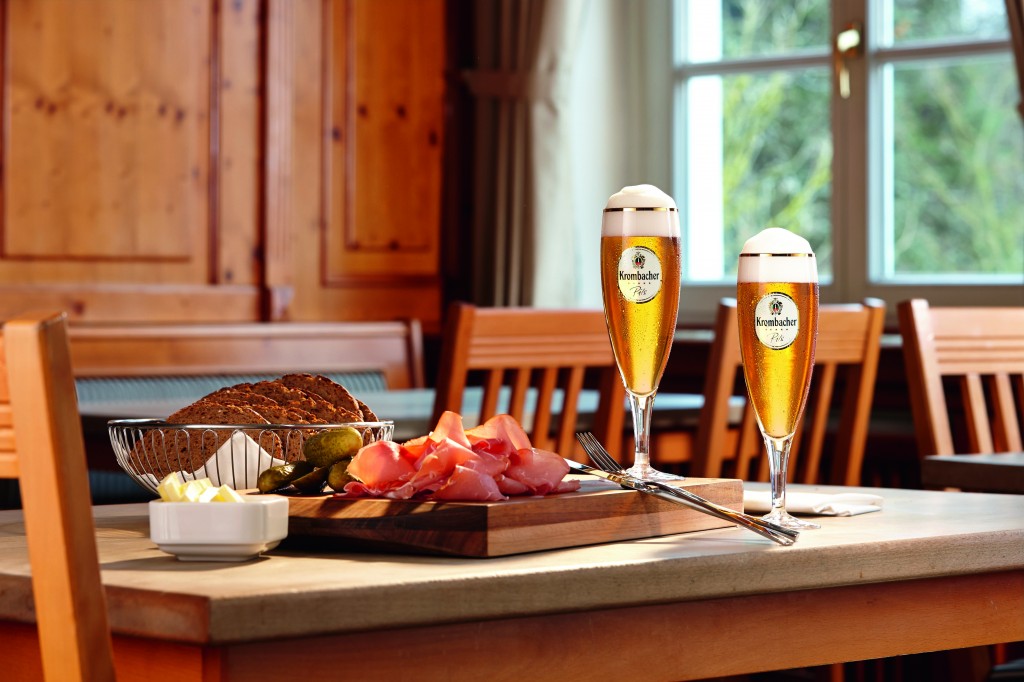 What is the silliest thing you’ve done whilst drunk?   When I was 16 I went on a language exchange program and stayed with a family in Worthing for several weeks. One night a friend and I went to the local Pub and tried to order a pint of beer. The landlord refused but advised he would be happy to serve us cider, a drink we were not familiar with as we both grew up in the North of Italy. Little did we know it contained alcohol and several pints later, I stumbled out of the Pub, my head spinning and vision blurred. As I could barely walk, I ended up hugging a lamppost in search of support. A picture of me and the lamppost still exists today.

What is the best part of your job?   The best part of my job is meeting interesting people and being able to tell them about our Premium Beers. I truly enjoy working in a high-paced environment where every day is different and I have the privilege to interact with varied groups ranging from Importers, Wholesalers, Distributors, On-Trade Outlets, consumers and Press. I love that my current job challenges me every day in different ways. I really value the freedom to experiment new things and the people I work beside.

You are stuck on a desert island, what three things are you taking with you?   Water, matches and a Satellite phone, so I can keep hydrated, stay warm but most importantly call for help when I’m getting bored of doing nothing.

Thank you to Stephan and Krombacher for chatting to us.