Beers of Europe attended the 30th year of  Mayor’s Business Awards on Friday 1st March and was a Finalist in the Small Business Awards 2019.  There were over 250 guests attending the sold-out ceremony hosted in association with the Lynn News at Lynn’s Corn Exchange, Norfolk. 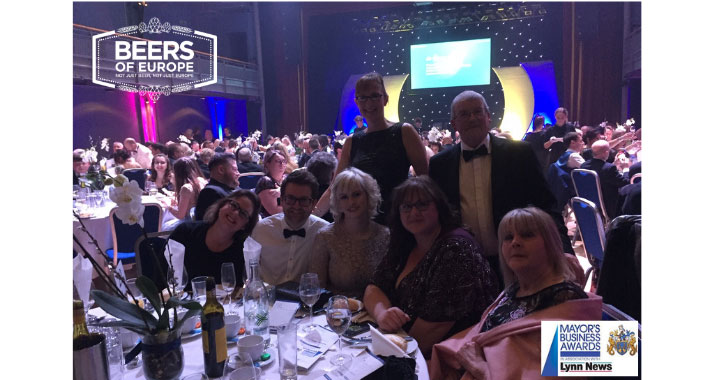 Nine awards were presented during the glittering ceremony to some of the brightest and best of West Norfolk’s entrepreneurs.

The main award, the Mayor’s Business Award, sponsored by the Borough Council of King’s Lynn and West Norfolk and was open to a business trading for more than three years with a minimum of five employees that could show evidence of business growth, a commitment to the local community, a business strategy and vision for the next three to five years.

Mayor Nick Daubney, said it was “a very proud moment” to address the awards his father, Les, had established in 1989 during his mayoral term as the borough’s current civic head.

He said: “So very much has changed in that time but what remains is the sheer level of ambition, drive, innovation and determination demonstrated by the businesses of West Norfolk.

Jason Clark, Directory at Beers of Europe said “This was a great night and the first time we have entered an award. There were forty other companies that took part in ‘The Small Business Awards’ and we came in the top three finalists, I am very pleased and we will definately be back next year!”

Merxin Ltd, whose headquarters are at the King's Lynn Innovation Centre, was named Mayor's Business of the Year, sponsored by West Norfolk Council.