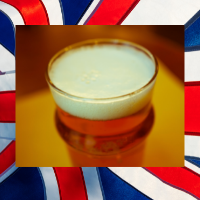 Beer Day Britain has been running since 2015 and was started by the award-winning beer sommelier, Jane Peyton.  Jane is the driving force behind the day, which is supported by the beer industry’s major organisations, including Britain’s Beer Alliance, Society of Independent Brewers (SIBA), the British Beer and Pub Association and the Campaign for Real Ale.  As well as being an award-winning beer sommelier, Jane Peyton is also an author, broadcaster, drinks educator, events producer, and founder of the School of Booze.

What’s In A Date?

June 15th was chosen as in 1215 the Magna Carta was sealed on that date.   In clause 35, ale is mentioned, showing that ale has been a part of the UK’s culture for centuries:

It should be noted that the legal measure is unknown, with the pint only becoming a legal measurement in 1698.

A Handful of Historical Beer Facts

Beer has been part of our lives for centuries, going as far back as 8000 BC. It is known that in 3000 BC, the standard diet for the poor in Egypt was beer, bread and onions.

In 2000 BC, The Beaker People arrived in Britain. They considered beer to be so important that they would be buried with their pottery beer mugs.

Over the centuries, the remains of a number of beer-like drinks have been discovered, from wild wheat and barley to somewhat more dangerous concoctions that included deadly nightshade. Indeed, it is thought that the creation of mead followed honey beers, which were mixed with wheat, barley or herbs. 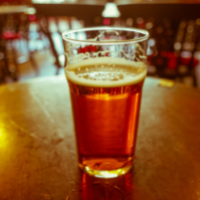 In 5000 AD the Angles and Saxons started to settle in Britain. It is thought that their social life revolved around beer halls and they recognised three main types of beer - mild ale (thought to be fresh and sweet), clear ale (older and sour) and Welsh ale (likely to have been made with wheat and honey).

The first record of hopped beer in Britain dates back to circa 1362 when it was imported from Amsterdam to Great Yarmouth.

The earliest mention of beer being brewed in Britain, with imported hops, was in 1412 when it was made in Colchester.

Beer styles that are recognised as being first brewed in Britain or those most associated with Britain include barley wine, bitter, blonde ale, extra-strong bitter (ESB) and stout.

How To Get Involved! 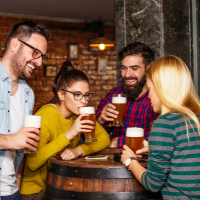 The focus of Beer Day Britain is to drink and celebrate beer, whether that is at home, a pub, a brewery taproom - or anywhere that you might drink beer!  At 7 pm, people raise a glass and say ‘Cheers to Beer’, followed by a post on social media using #CheerstoBeer as the hashtag, which often trends throughout the day and evening.

Since 2015, people have taken part in a number of different ways.  From breweries running special celebration beers, brewed with British hops, to pubs and bars holding special events.  There is even a ‘Cheers to Beer’ singing contest!

Whatever style of beer you enjoy, take a moment on the 15th June to raise a glass of something cold and be thankful for those early days of experimentation that led us to the beers we love today.  We say #CheerstoBeer for that!