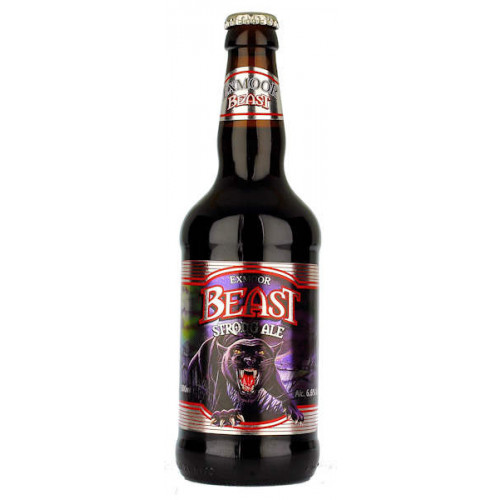 Share
Reviews Rating
(1)
Product Information
Country:
Producer:
Style:
Sub Style:
Container:
ABV:
Bottle Size:
Beast by name and Beast by nature, this exquisitely strong-willed, full-bodied dark porter first saw daylight in the autumn of 1992 and is now available both on draught and in bottle. Inspired by the fireside tales of wild cats roaming the moors of Exmoor and a continuation of a beer style that emerged in the 1700s and was named after its popularity with London porters, this complex and heady brew has been a continual favourite of beer fans up and down the country. Its strength means this is a beer to be respected, sipped slowly to warm up a winter’s night while the weather does its worst. Or you might like it slightly chilled elsewhere in the year, a beer drinker’s version of an Irish coffee.

Brewed with a mix of pale ale, chocolate and crystal malts, and hopped with Goldings, Challenger and Brewers Gold, it is dark mahogany-brown in colour, with the merest hint of crimson tints at its edge. Lush rich aromas of toffee, treacle. Mocha coffee, vinous fruit and chocolate swirl above the glass. There’s more complexity on the palate with rich fruitcake, a hint of rum, more Mocha coffee, an herbal hoppiness, vinous fruit, while the bittersweet finish is smooth yet complex, rich but not cloying.

Try it with ice cream where the vanilla flavours would work well with the bittersweet richness of the porter; it is also ideal for a ripe Stilton or even as part of the mix for a rich winter stew. Try it also in cake mix, with one local Exmoor favourite being an Exmoor Beast fruitcake with whisky icing.
Ingredients/Allergens
(Allergens will be in Bold)
Barley Malt