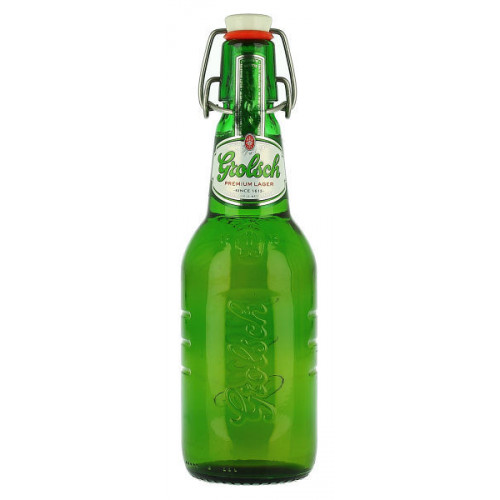 Share
Reviews Rating
(1)
Product Information
Country:
Producer:
Style:
Sub Style:
Container:
ABV:
Bottle Size:
When the new brewery was built in 2002, the master brewers of Grolsch demanded that none other than the natural spring water used in the previous brewery would suffice. Their insistence meant that a 7km water pipe was constructed to bring the natural water to the brewery. The brewers may be a fussy lot but its thanks to them that the authentic refreshing taste of Grolsch remains unchanged.

Grolsch uses only the best single malt variety in its brewing. The barley is grown by our carefully selected suppliers from the Netherlands, Germany and France. Our master brewers then hand pick their selection of single variety malt to their own unique blend. This blend is then tested and tested again and only when our master brewers are completely satisfied that the blend can deliver the perfect taste is it then brewed.

It was Peter Cuyper, often referred to as the ‘father of Grolsh’ who was the first to experiment with two different types of hops added at differing stages of the brewing process. This produced the unique, authentic taste of Grolsch. His two hop discovery has remained consistent in Grolsch through the ages. These days we use the female hop blended with the aroma of bitter hops expertly selected by our master brewers. It is this blend that gives Grolsch its distinctive, bold and hoppy taste.

Grolsch uses a unique and centuries old strain of yeast in its brewing process. The strain is, in fact, so exclusive and important that it is kept locked away to ensure that should anything befall the coveted yeast strain in Enschede, the brewers can sleep safe in the knowledge that there is a backup.Grolsch uses a double fermentation process which means that high and low yeast differ in both the temperature at which they start working and the direction they float once the yeast is finished.