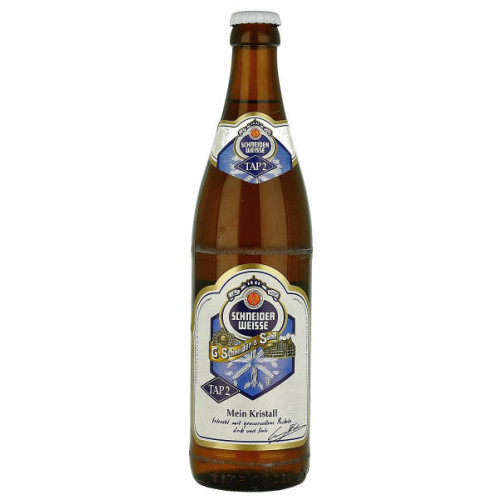 Share
Reviews Rating
(2)
Product Information
Country:
Producer:
Style:
Sub Style:
Container:
ABV:
Bottle Size:
Schneider Weisse was founded in the Kelheim region of Germany in the 19th century and is renowned across the world for instigating the revival of the wheat beer following King Ludwig’s discontinuation of the style due to poor sales. Going from strength to strength, Schneider Weisse today is in the 6th generation of the Schneider family, but still retains the passion and creativity from more than 200 years ago. They produce several beers or ‘taps’ as they are known and this one in particular, the ‘Tap 2’, is their Kristall.
Brewed since 1990, this is a crystal wheat beer without the yeast and is therefore presented without the usual haze in the texture. It has plenty of hops with Cascade, Hallertauer, Magnum and Saphir varieties all used in the production with wheat and barley malts used in its production. It appears light gold in colour with a strong fruit aroma, the malts lending banana and spice fragrance to the beer. Strong carbonation leads to a refreshing beverage that can be served as an aperitif at 5.3% or can be paired perfectly with fish dishes. A variation on a classic, still presented in a weizen glass.