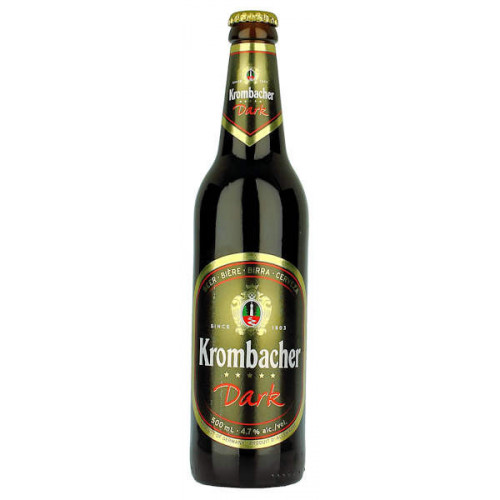 Share
Reviews Rating
(16)
Product Information
Country:
Producer:
Style:
Sub Style:
Container:
ABV:
Bottle Size:
Krombacher started off the same way many German breweries have with an innkeeper who just brewed a beer to make a living, completely unaware that he is starting a chain of events that results in a beer that would be admired around the world centuries later.The first mention of the Krombacher Brewery is in 1803, family run and with a reputation that began to spread through the towns and villages as far as Cologne. The next century brought an industrial revolution to Germany, bringing new technologies, new methods of distribution and, more importantly, new customers to try the delights of Krombacher.
Krombacher Dark is a bottom fermented pilsner that uses various roasted malts to create a rich and complex flavour. It is produced using its signature spring water as well as barley malt and Halletau hops, the top quality ingredients forming the basis for a beverage with depth that offers a full bodied taste experience. It is ebony in colour with a creamy head and an aroma of rich malt. The taste is that of moderate bitterness with light hops that are well balanced with the roasted malts and an intense finish to follow. It can be served around8°C and can be paired with hearty dishes such as game, roasts or stews or makes for easy drinking simply on its own.