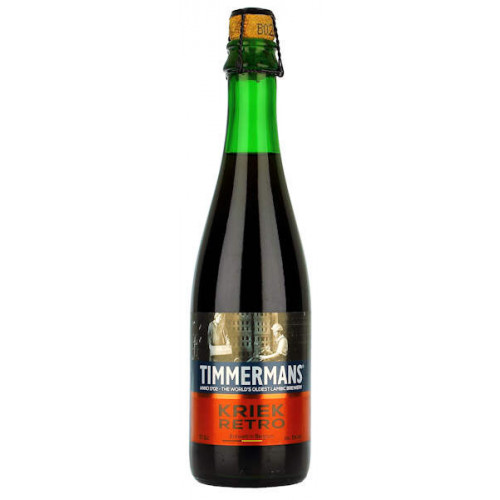 Share
Reviews Rating
(1)
Product Information
Country:
Producer:
Style:
Sub Style:
Container:
ABV:
Bottle Size:
This beer has instant appeal thanks to the hue of its ancestral garb and its fruity aroma which is so pleasant to the nose. Its flavour – bitter but was a very slight sweetness – recalls how pleasant it is to drink a beer that’s saturated in history. Timmermans Kriek Retro is to be savoured in the same way that one beholds a painting by Breughel.

With its tart aroma, this Kriek of long-standing tradition elegantly reminds the drink that the cherry is the distinctive element in this gueuze. The flavour of its old lambic nevertheless accounts for most of its flavour, which is made only slightly smoother by its fruitiness. It releases a variety of very pure sensations on the tongue, concluding with a superb acidity that is frank but also refreshing and healthy, in keeping with tradition. Its brightness is equalled only by its sparkled and its light-as-air foam.
Ingredients/Allergens
(Allergens will be in Bold)
Water, Barley Malt, Wheat, Cherries 3.6%, Concentrated Juice(Cherries 2.38%, Elderberries 0.19%), Sugar, Hops, Flavourings and Antioxidant (E300)