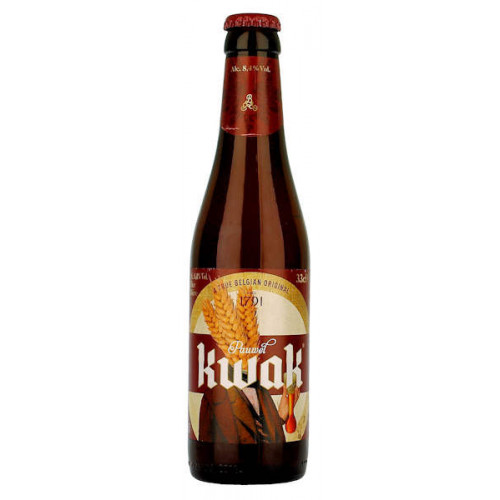 Share
Reviews Rating
(5)
Product Information
Country:
Producer:
Style:
Sub Style:
Container:
ABV:
Bottle Size:
Pauwel Kwak Beer is a Belgian strong ale brought to you by Brouweril Bosteels, the brewery that produces the incredibly popular Tripel Karmeliet and Deus Brut des Flandres. Their high quality beers are a result of years of practice and a bit of inspiration from the right places.

Pauwel Kwak was a brewer in the 18th century, who brewed his own dark beer for his coaching inn in the Dendermonde region of Belgium. At the time, Napoleonic rule meant coach drivers were unable to leave their coach to drink with passengers, so Pauwel quickly solved the problem, creating a unique glass and stand that could be attached to the carriage for the drivers, so they could enjoy the beer too. Such perseverance to fulfil a person’s right to a beer was deemed worthy by the brewers at Bosteels, who have brewed Pauwel Kwak in tribute since the 1980’s.

It is a fairly simple brew in comparison to the bigger Belgian beers, with just a few key ingredients making this a world class beer. Barley, water, wheat, hops and sugar combine in harmony to create a deep amber coloured beer with a thick head. The aroma is that of earthy malts, herbs and fruits, with hints of liquorice and spicy hop bitterness on the palate and a caramel and banana finish. Naturally, it should be served in its own glass, the ‘koetsierglas’, with the convex bottom and wooden stand.

Pauwel Kwak is distinctive from its inspiration, to the glass, to its taste, and is iconic for a reason. This is a definite must-try for anyone that enjoys Belgian beers.
Ingredients/Allergens
(Allergens will be in Bold)
Water, Barley Malt, Wheat, Sugar, Hops and Spices