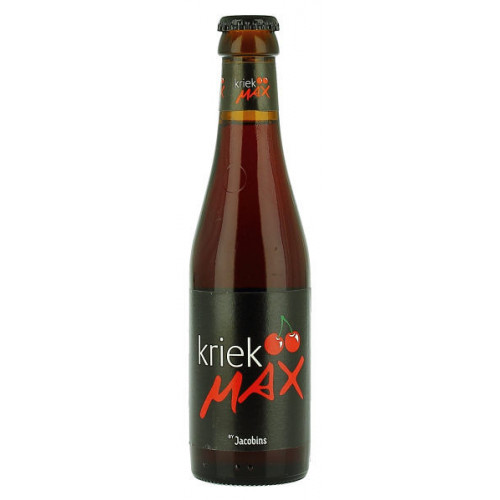 Kriek Max occupies another position on the beer market than the traditional Jacobins Kriek, as it has a lower alcohol content of 3.2%. Kriek Max furthermore contains no less than 25% of cherries and consequently offers a sweeter, even fuller flavour.

Kriek Max is made from a mixture of bottom-fermented and spontaneously fermented beer (also called foeder beer). The perfect combination of cherries, natural juices and aromas on the one hand and the basic beer on the other hand lends this kriek not only its excellent flavour, but also its pleasant smell.

The base concept “more flavour” is clearly linked to the word “max” suggesting maximum flavour and thus creating a clear product image. It’s clear, dark red colour and its fruity character appeal to many consumers. Served in its own tulip glass with an elegant stem, Kriek Max is a true delight for real kriek beer lovers!
Ingredients/Allergens
(Allergens will be in Bold)
Barley Malt and Wheat