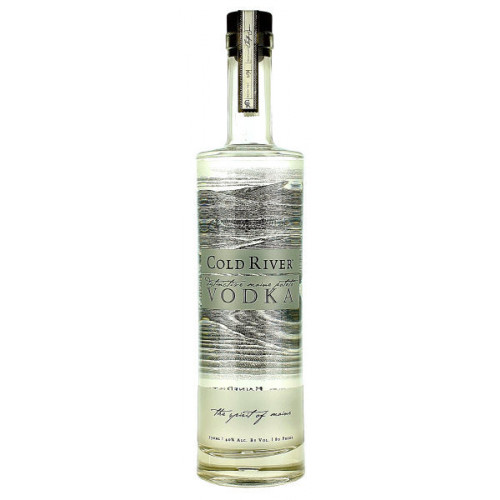 Share
Reviews Rating
(0)
Product Information
Country:
Producer:
Style:
ABV:
Bottle Size:
Cold River Vodka is a 100 percent Maine potato vodka, which turned an economical crop into a top-shelf-spirit - and added value to Maine's potatoes and reputation for high-quality goods in the process. A super-premium, martini-quality, gluten-free spirit, our Classic Vodka is distinctive among the world's most sophisticated spirits.

Cold River Vodka is The Spirit of Maine… and it embodies that spirit perfectly. It’s authentic. It’s complex but not complicated. Each bottle of our vodka is numbered by hand to reflect its batch and ensure its exceptionality and excellence.

Our potatoes are grown from seed to spud at our own family-owned Green Thumb Farms in Fryeburg, Maine. At Maine Distilleries, from the potato farmer to the distiller, there is a passion for Maine and its roots (literally) that will be infused into every bottle of our clear, distinctive vodka.

Cold River Vodka has earned its fair share of awards and accolades: In September 2007, earned a Five-Star Premium Recommendation from Spirits Journal. In 2008, our Classic Vodka was named to Wine Enthusiast’sprestigious list of “Top 50 Spirits,” and earned the magazine’s sole “Classic (96-100) / Highest Recommendation” rating for 2008. We went on to earn a Double Gold at San Francisco’s 2008 World Spirits Competition, and our vodka was featured as “The Best American Vodka” in spirits expert F. Paul Pacult’s Kindred Spirits 2.

Attention to detail makes all the difference - from the planting of the first potato seeds in Fryeburg, to our triple-distillation process in our copper pot still in Freeport, to taking the first celebratory sip of our first Classic Vodka batch in November of 2005.