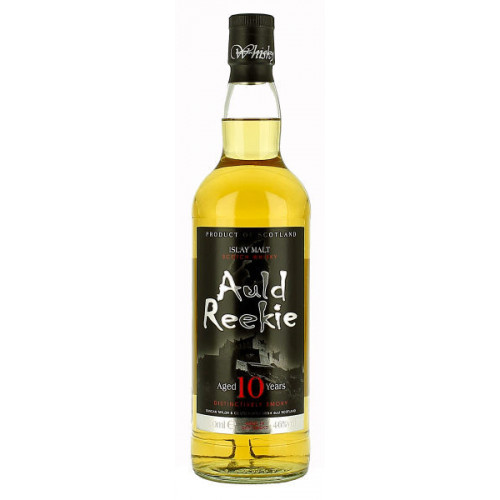 Share
Reviews Rating
(0)
Product Information
Country:
Style:
ABV:
Bottle Size:
Edinburgh has long been associated with smoke, whiskey and royalty. It is reported that in 1777 there were no fewer than 400 illicit distilleries in Edinburgh. These easily went undetected in the thick smoke that filled the city. The smoke was such an issue that the capital became known as ‘Auld Reekie’.

In more modern times, Edinburgh has lost its reputation as being the smoky capital of Scotland, with the Island is Islay now more synonymous in whisky circles with smoke.

Duncan Taylor’s Auld Reekie is a 10 year old bottling of Islay malt whisky. Each cask is specially selected for the pungent smoky character unique to Islay whisky, ensuring that Auld Reekie is worthy of the title. Bottled at 46%, with natural colour and no chill-filtration, our process allows you to experience the true smokiness.

Pours pale gold with an initial big smoky flavour then softer, sweeter notes emerge with some light citric notes.Exceptionally smooth in flavour, coastal and sweet with obvious peat smoke most dominant with a long lasting and lingering flavour, the smoke continues to develop long after the whisky is finished.

Drink straight, sit back and wait for the smoke to engulf you.