Back to all articles
The Norfolk Sloe Company | Q&A
Originally Posted on Aug 31, 2016

Are you curious to know about the people behind the beers you buy? Or perhaps you want to know what inspires brewers to brew and beer bloggers to blog? Our “Q&A” posts are a light hearted way of getting to know people working in, and connected to, the beer and alcohol industry.
Today’s post features The Norfolk Sloe Company, a family run business based in Fakenham.

Who are you/what do you do?   We are Patrick and Sarah, The Norfolk Sloe Company.  We began making Sloe Gin in 2011.
As the Sloe Gin gained popularity and achieved the prestigious accolade of becoming a Great Taste 3 star award winner we focused our attention on developing our own Norfolk inspired premium gin.  In December 2015 after years of taste trials involving gin loving friends and family our dream became a reality and the first 1000 bottles of Black Shuck Gin were sold within just four weeks.  It always gives us a thrill to see our gin on the shelves in any store, bar or restaurant and hearing customers rave about the taste will always be thrilling.

How did you get into this line of work?   It was the summer of 2011 when we were concerned about the value of our pensions that we decided to start our own business.  At that point we did not know what our line of business would be.  After weeks of deliberating we hit on the idea of making and selling Sloe Gin.  We had been making it for friends and family as Christmas presents for many years.

Where did you learn to make gin?   We began with plenty of practical and internet research.  We have also had the good fortune to work with world renowned experts as we developed Black Shuck Gin.

What was the inspiration for starting The Norfolk Sloe Company?   Our family are a great inspiration.  They have been an integral part of the business from day one.  We wanted to show our children that it is possible to have a dream and make it come true.  We are very proud that we have produced our own designs, developed our own recipes, created our own website with an online shop. 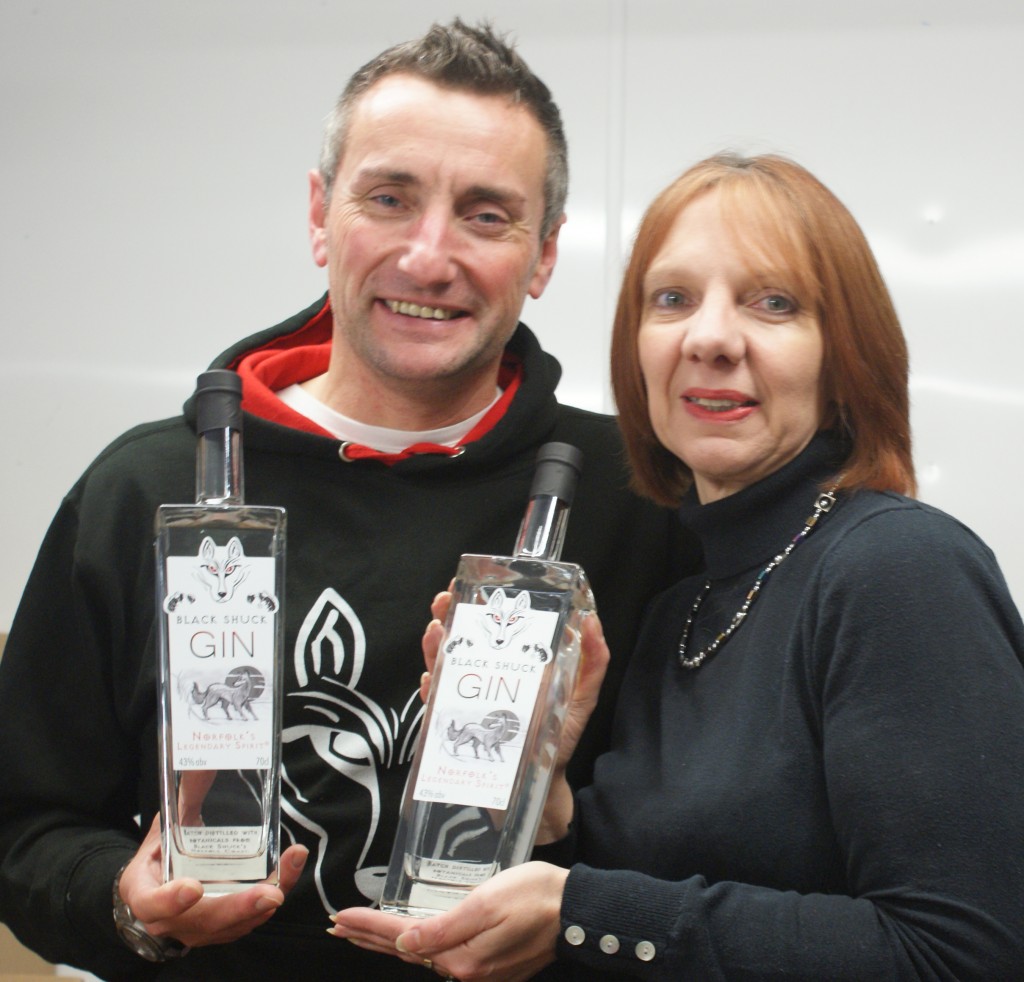 Could you tell us about the company name and logo and the connection to Black Shuck?   The legend of Black Shuck is synonymous with the Norfolk coast and one, with which we have grown up.  Consequently, using Black Shuck for our brand image together with the strapline Black Shuck Gin, Norfolk’s Legendary Spirit, seemed fitting.  The Black Shuck image used all of our products was designed by our daughter Leanne and we feel enormous pride every time someone comments on its striking appeal.
Dating back hundreds of years, Black Shuck is one of the oldest English legends. Not surprisingly, there are as many variations of the legend as there are varieties of gin.
Whilst some recorded sightings claim that the ghostly spirit dog, with its huge red eyes, acts as a protector of lone women walking along the coast paths at night, other firmly believe that the legendary hound is a bad omen.  We are happy to confirm that a glass of Black Shuck Gin or Liqueur will fill you with enough good spirit to keep any bad spirits at bay!
It is without doubt that the legend was popularised by smugglers who told elaborate stories to keep the fishermen at bay whilst they smuggled their contraband ashore.
Wherever we go someone has his or her own story or Black Shuck experience to share with us.  It is always a good talking point whether you are familiar with the legend or discovering it for the first time

Are there any other distilleries which have influenced you?   It has to be Sipsmiths.  Up until 2007 HMRC insisted that anyone wishing to distill and sell gin would have to produce at least 10,000 litres per year.  This made it impossible for small (craft) distilleries to exist.  Fairfax Hall and his team at Sipsmith changed all of that.  They relentlessly lobbied parliament until 2009 when the law was changed. In the years prior to 2009 just five new distilleries were built.  Since 2009 over 70 new distilleries have been established.  Setting up a distillery remains a complex legal process but with hard work and determination it is possible.  Consequently there are now many ‘craft gins’ for us all to enjoy. 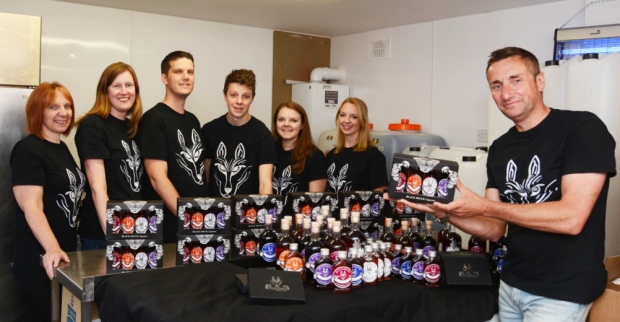 Out of all the gins and liqueurs you make, which is your favourite?   This is a question we get asked a lot and it never gets any easier to answer.  Some days nothing can beat a shot of Sloe Gin.  On a summers evening when all the bottling and paper work are done for the day a Black Shuck Gin served with an orange zest garnish over plenty of ice will really hit the spot.  In the winter, when we are out and about in all weathers picking sloes and offering tastings at Winter Fayres, a shot of warmed Plum Brandy is just perfect.

There are many weird and wonderful flavoured liqueurs and gins available these days. Do you have any plans to expand your range? Is there any flavour combinations that you think would work well together?   We are continually working on new recipes so watch this space.
It is an exciting time for gin with new flavours coming to the shelves every month.  When creating Black Shuck Gin we took inspiration from the Norfolk Coast.  We toyed with a number of ideas for botanical combinations for over two years before deciding to use Norfolk lavender and sea buckthorn among the 11 botanicals that created the unique flavour that Black Shuck Gin provides. Suggestions are always welcome!

What was your first drink and where were you when you had it?   (Sarah’s answer) Most evenings my parents would have a cinzano and lemonade and a lager and lime.  Being the helpful (young) daughter I would offer to get their drinks for them.  After pouring their drinks I would take a sneaky gulp of each before taking them through to my parents.  At the time I thought I was being very crafty.  It was many years later that they admitted that they had been fully aware of what I was doing.

What drink can you no longer face having had one too many?   Sarah – Merrydown Cider!

What is the silliest thing you’ve done whilst drunk?   Got engaged!  I was 18 and at a friends party when my then boyfriend proposed.  In the cold light of day we both agreed it was a silly idea and the ‘engagement’ was off.  Unfortunately, I lived in a small town and by the time I got home word had already reached my mother that I had got engaged.  She was not impressed!

Finally, would you share your favourite cocktail recipe with our readers?    Our current favourite is our own creation, which we have named the Gin Genie.
To make a Gin Genie fill a large goblet with plenty of ice.  Pour over one measure of Black Shuck Gin.  Add a splash of Pomegranate and Elderflower Cordial (we use Green Bottle).  Sprinkle over a few pomegranate seeds to garnish then top with 100ml of Prosecco.

Thank you to Patrick and Sarah for chatting to us.

You can view and buy gin and liqueur from The Norfolk Sloe Company here.