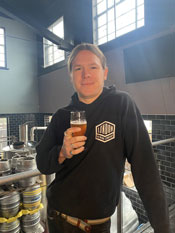 Q: Who are you/what do you do?
A: We are London Brewing Co. a microbrewery approaching its tenth birthday this year. We are a small team of beer lovers, sharing an appreciation for traditional beer styles and new styles rising out of the craft beer movement. We brew beers that excite us, hoping we can pass the same feeling to our customers.

Q: What was the inspiration for starting the brewery?
A: With a passion for good beer and experience of running pubs, the rise of craft beer in the USA triggered us to put our stamp on the London brewing scene. In 2011 we set up our first brew-pub bringing bold, hop-forward beers to North London and creating our best versions of traditional beer styles. 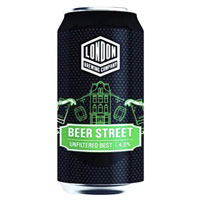 Q: Which beer was your first craft beer? Do you brew/prefer Craft or Real Ale?
A: The line these days is so blurred between craft and real ale, it’s hard to pinpoint. We have always been a very cask-focused brewery, receiving several accolades from CAMRA festivals over the years. As head brewer, my personal philosophy isn’t about what I prefer, but rather what I prefer for the time and situation. Give me a Full-bodied bitter by the fireplace after a long winter walk and a clean, crisp, cold pale for a sunny day at the beach.

Q: How is your beer connected to your local area?
A: We take pride in supporting our local community because we know they go above and beyond to support us. We are based out of The Bohemia, our brewpub in North Finchley. Since moving into the area we have been embraced by the community more than we can believe and we try to give back in any way we can. We have run monthly events to raise money for local charities, giving away beer for donations. We try to support local artists by displaying their work around the pub and provide workshop and events space for local initiatives. 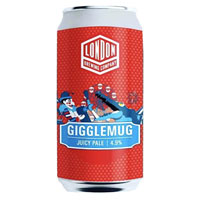 Q: What’s unique about your beer? Why is it relevant?
A: Through years of experience, we have refined our core range with distinct flavour profiles, producing exactly the beers we want to drink. We put as much effort into perfecting the small details of our best bitter, as we do crafting new recipes for one-off specials. Our brewing philosophy is driven by a passion for well-executed beers. Whether you’ve just tried your first hazy hop-monster or already made your way through all the barrel-aged impy-stouts you can get your hands on, we can point you to the beer you need.

Q: Where do you see, or hope to see, the brewery in 5 years’ time?
A: Our priority is to produce the best beer we possibly can. In 5 years, we would like to continue being driven by a spirit of innovation and quality as our beer reaches more people around the world. As we are fundamentally a brewpub we hope to open some more taprooms in the coming years. 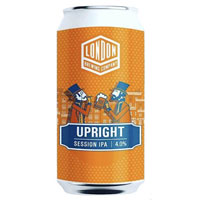 Q: Are there any other breweries which have influenced your brewery?
A: As beer nuts, it’s hard to single one brewery out. Beer in the UK is thriving at the moment and we continue to be influenced by any exceptional beer we come across, sharing experiences and ideas among each other as much as we can. We are regularly inspired by other breweries, as we try to taste as much as possible. Whether someone rocks up with a mixed ferm sour or the latest hype, hop-bomb we’ll share thoughts and ideas about the beer and this will inevitably influence what we want to brew.


Q: The craft beer movement has taken a bit of a knock lately due to Coronavirus, how have you had to adapt and change your marketing?
A: Obviously, it has been a hard time for everyone. Our focus has always been selling to pubs and through our pub and as such most of our beer has always been in kegs and casks. Like many other breweries, we have had to diversify and have undergone a big shift toward creating craft cans. We’re really happy with how they’ve come out and hope they’ll find their way into peoples homes in these hard times.

Q: Before Coronavirus the craft beer movement seemed to be going from strength to strength. Why do you think brewing has seen such a great success in recent years?
A:. It has become clear that the market is there for craft beer. There has always been an appetite for high standard beer in the UK and the global craft beer movement has been a success story so far. When given the choice, there is clearly a large population of dedicated beer drinkers who prioritise quality and bold flavours.

Q: How do you decide on new beers to brew?
A: Essentially it’s just discussion and the sharing of ideas. If someone has a good idea, we run it by the team, and if it looks like something we can do, we work on recipe development it. We then do a pilot brew, maybe more than once, to test it. If we decide to make it commercially available we brew a 1000 litre batch and start serving it straight away at the Bohemia. We find out pretty quick if it is popular or not.

Q:  What are the different styles that you brew?
A: In the past ten years, we have brewed a huge variety of beer styles. Fundamentally our cask range tends to be more traditional styles and our keg beers are more American inspired. But we like to break the rules as much as possible. To date, we have produced over 83 completely new beers from scratch.

Q:  Are any of your beers organic?
A: At present we do not make any organic beers.

Q:  Are any of your beers gluten-free?
A: We do not currently brew any gluten-free beers.

Q:  Do the kinds of hops really matter?
A: The kind of hop matters is the understatement of the century. Not only does the kind of hop matter but the storage conditions, crop year and specific batch matter. No batch of hops gets used without testing to make sure it meets quality and flavour standards.

Q:  Have you brewed any collaboration beers?  If yes which ones? (And if no are you open to the idea?)
A: We have brewed a number of collaborations. Most recently, we did a Black Kolsch style beer with Wild Card, Howling Hops and Bohem. The beer went on to win Gold at ‘Love Beer London’ in the speciality lager category.

Q:  What is the inspiration behind the artwork/branding on your cans/bottles?
A: Our beers are named after Victorian slang for example Gigglemug is slang for ‘habitually smiling face’. We are one of the first brewpubs in London and have always been proud of our home. To honour this, our cans give a nod to Victorian London both in names and design.

Q:  Do you design your cans/bottles in-house?
A: Our can designs were outsourced to one of our punters in the brewpub. He’s a great designer and we’re really happy with how they’ve come out.

Q: What do you see as the latest beer styles to look out for the future?
A: Really craft beer has come full-circle. In a way, some of the most exciting beers coming out are not as such because they are a new exciting style, but rather, perfection of an existing style. So look out for beer styles you know, but done really, really well.

Q: Many breweries are experimenting with adding unusual flavours to their beers. Are there any you think work well together and are there any you would like to try?
A: Well, we’ve used all manner of ingredients in our beer before, from beetroot to chorizo. I’ve always loved our Cherry and Raspberry Berliner Weisse so look forward to that coming back. We have some ideas for flavoured beers coming up, but we’re keeping our cards close to our chest until they’re ready. You’ll just have to wait till their released.

Q: What does quality mean to you?
A: To us, quality is something being as it should be. Beer is a combination of four fundamental ingredients. Forwarding the desirable qualities of these ingredients and producing a beer respectful of them is our ultimate goal. Quality means hitting and exceeding targets of flavour, aroma, appearance and carbonation but most importantly creating a beer that people love.

Q:  Looking ahead, what new beer can we expect from you?
A: The word ‘unprecedented’ has been ubiquitous of late, but the honest answer is, we really don’t know. It depends on the market going forward. We will continue to prioritise quality, first and foremost in whatever we do.

Q: Is working at a brewery different than what you thought it would be?
A: I think working at a brewery is different to how anyone expects it to be. To be a brewer, you can expect a long slog of cleaning containers to start. A lot of people don’t consider how much of your time is spent cleaning in order to run a hygienic brewery producing clean beer.

Q: What is the best part of your job?
A: Without doubt, actually brewing beer. When your heart and soul has gone into producing something and when you taste the final product, you are not only happy with it but so is a pub full of chuffed punters. You can’t beat that feeling. Knowing that hard work and care has lead to that moment, only makes it sweeter.

Q:  Beers of Europe will shortly be opening their own Taproom/Bar/Restaurant, would you like your beer to be included and what USP do you think you could bring to our bar?
A: Of course we would. We have a lot of experience among our team of running pubs and bars. Not only are we passionate about producing quality beer, but we are experienced in hospitality too.

What was your first drink and where were you when you had it?
A: Oh Blimey, now you’re asking. Well, I used to regularly pinch my Father’s bottled ales from the shed as a teenager. The first I developed a taste for was Hobgoblin by Wychwood. This is where my passion for beer kicked off.

Q: If you have to pick (we know, tough choice!) which would be your top three beers in the whole world?
A: I will almost certainly change my mind and forget something important but here goes:
In no particular order:

Q: You are stuck on a desert island, what three things are you taking with you?
A: Malted Barley, Hops and Yeast. Obviously