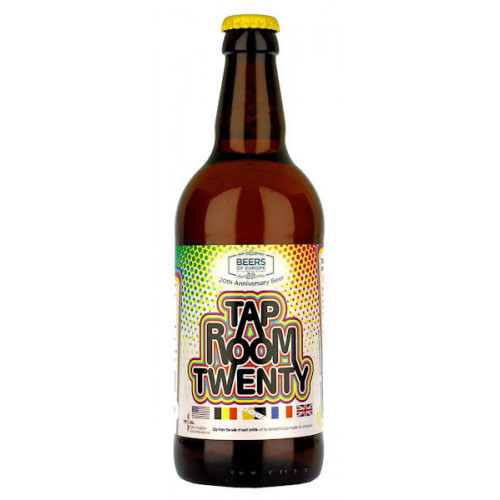 20p On Each Bottle Donated to the East Anglian Air Ambulance

Offering up exciting beers from across the globe for 20 years, Beers of Europe decided to mark their 20th Anniversary by releasing their very own beer, “Tap Room Twenty”, brewed exclusively for them by the local brewery, Norfolk Brewhouse.

Brewed with the chalk-filtered water from the brewery’s own well, this Belgique-style beer has a citrus aroma, with hints of lemon and orange. Norfolk and European malts give a biscuit backbone and combined, lead to a clean crisp finish.

What’s In A Name?

Tap Room: It is not just a bar, it's a place to discover new experiences.

Through engaging conversation, culture, and the introduction of new flavours, patrons are able to explore parts of the world, they may never travel to – it was felt that this also represented Beers of Europe’s range of extensive world beers.

20: This marks the 20th Anniversary of not only Beers of Europe, but also our chosen charity, the East Anglian Air Ambulance who exist to save lives. They deliver critical care to seriously ill or injured people and are a life-saving charity, which is kept airborne by their incredible supporters. Beers of Europe will donate 20p from every bottle sold to this worthy cause.

You can donate directly to their ‘Help Protect The Crew PPE Appeal Here>>https://www.eaaa.org.uk/support-us/protective-equipment-appeal

Brewed by The Norfolk Brewhouse

The beer is brewed by The Norfolk Brewhouse which is owned and run by Rachel and David Holliday, a couple with a passion for crafting distinctive, high-quality beers, and for this project they were joined by Beers of Europe’s very own trainee sommelier, Matthew Keeley-Smith.

Their brewery is situated in the rural setting of North Norfolk, right in the heart of the country’s finest malting barley region. The water is from the brewery’s own well! Moon Gazer Ales are their branded beers and the inspiration for the names comes from the wildlife around the brewery.

David Holliday says; “We want the beer to reflect heritage and quality – so malts used included the heritage barley Chevalier – a premium barley, but also includes Vienna and Pilsner malts, as we wanted the beer to reflect the Belgian / European feel to promote where it all began for Beers of Europe.

Hop wise, it is looking to reflect Britain and Europe but also America – to reflect BoE global sourcing.

Beer wise, it is an IPA, a nice modern style, but with a blend of traditional Belgian and British beer notes, so it offers the best of all that Beers of Europe bring together.”

The label was designed by Cambridge based designer, Stuart Catterson, a good friend of Beers of Europe and Moon Gazer.

This is a beer that can be enjoyed by everyone, old and new and is a great beer to stay in and kick back with!