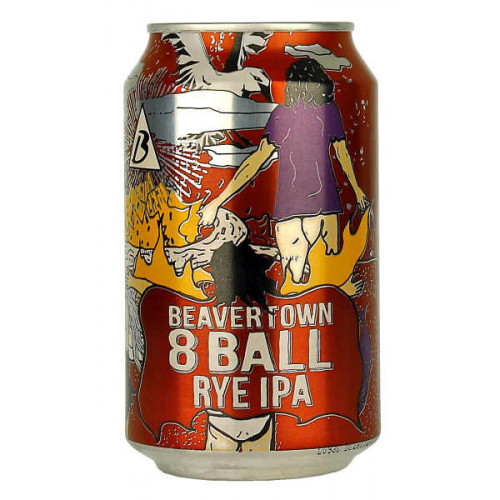 Share
Reviews Rating
(0)
Product Information
Country:
Producer:
Style:
Sub Style:
Container:
ABV:
Bottle Size:
Beavertown began its journey in 2011, founded by Logan Plant, son of Led Zeppelin’s Robert Plant, as a homebrew project that has become one of London’s finest craft breweries. In that time they have grown exponentially producing big tasting beers in cans with an easily recognisable design. Famous for a core range including Gamma Ray and Neck Oil as well as having a wide range of experimental brews, they continue to push the boundaries of the beer industry.

8 Ball Rye IPA is a nod to the big IPA’s of America.Brewed with a large amount of Rye malt to give a spicy, earthiness whilst Cara malts create a rich and bold mouthfeel.The use of Southern hemisphere and American hops balances the sweet malt character. The addition of dry hops after fermentation adds a wild blend of tropical, spicy aromas.

8 Ball Rye pours a hazy copper with a thin tan head.The aroma is high in hops with mango and guava, some rye, caramel and grassy notes.Well balanced in flavour with the high bitterness softened with sweeter flavours of caramel and fruit which are followed by a dry finish.
Ingredients/Allergens
(Allergens will be in Bold)
Barley, Rye