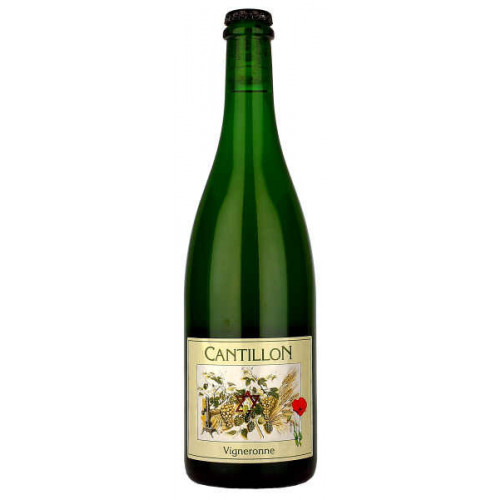 Share
Reviews Rating
(0)
Product Information
Country:
Producer:
Style:
Sub Style:
Container:
ABV:
Bottle Size:
The lambic brewers weren't only established in the Senne valley, but also in the valley of the Yssche . This small river has its spring in the Foret de Soignes and flows through villages like Hoeilaart, Overijse and Huldenberg. In this valley there used to live many brewers who made delicious lambic.

They didn't add cherries or raspberries to their beer, but grapes which had been cultivated in greenhouses. By blending muscat grapes and lambic, the brewers and beer merchants produced the "druivenlambik" (grapes lambic).

The name Vigneronne Cantillon was given in 1987. This name reminds us that, while it belongs to the beer patrimony, the spontaneous fermentation, the ageing in the barrels for several years and the addition of grapes make it a distant cousin of certain white wines.

In spite of its success, the Vigneronne represents less than 5% of the total production of the Cantillon brewery. In order to obtain grapes which are as mature as possible, we buy them at the end of the season. Every year, 1000 kilos of white italian grapes are delivered at the Cantillon brewery in the beginning of October. It is difficult to produce more Vigneronne even though the demand exists. All the grapes are picked from the bunch by hand and we don't have much time, since the new brewing season starts at the end of October.

The beers are not blended before the bottling. The second fermentation is caused by the addition of a sugared liquor. The six-pointed star on our label is an alchemist's symbol. It contains four elements, represented by triangles, of the brewing process. The fire is the symbol of the mashing tun, the earth of the cereals, the air of the yeasts, and the water is the fourth element. At this moment, only a brewer of traditional lambic may use this symbol.